Basal-cell carcinoma (basalioma) is the most widespread malignant tumor. Almost 40% of the elderly population worldwide is affected by this disease. 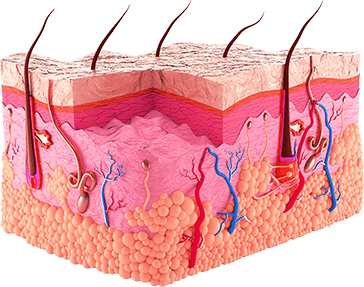 Warn yourself from diseases
Basalioma

Basalioma mainly affects the middle-aged and elderly, but there are exceptions: cases have been described of the tumor being detected in people under 30. One distinctive feature of this disease is its relative benignancy of its progression: the primary site grows slowly and rarely forms metastases. Nevertheless, neglected cases are fraught with the risk of serious tissue destruction caused by the disintegration of the tumor.

Nor can one rule out metastasis, in which cancer cells spread around the body through the lymphatic system or blood stream, forming secondary tumor sites. It takes about 9 years on average for metastases to appear, by which time the primary tumor is usually very large. Basalioma sometimes follows an unfavorable course from the start, rapidly penetrating to the surrounding tissues, attacking the lymph nodes and forming metastatic sites.

In the majority of cases, the prompt removal of the basalioma allows the disease to be completely cured and dangerous complications to be avoided. Individuals with a confirmed high risk of the disease, or who are known to have relatives with this type of tumor, are advised to conduct regular self-examination in order to identify skin formations, nodules, small lesions and other suspicious items.

The cause of basal-cell carcinoma has not been definitively established, but there is a rather impressive list of factors that increase the risk of the disease:

An excessive dose of solar radiation over a long period of time;

Light-colored skin that is prone to sunburn;

Freckles on the face and body;

Long-term use of corticosteroid preparations;

Recent studies by geneticists have shown that the genetic factor clearly plays a significant part in basal-cell carcinoma. Several genetic markers have now been identified that code for preconditions of malignant transformation of the cells of the basal layer of the epithelium.

Overall, the disease is typified by so-called genomic instability, which is characterized by a marked propensity towards mutations under influence of unfavorable external and internal factors. In this situation, ultraviolet or ionizing radiation causes the DNA chain to break, and dimers and other chromosomal anomalies to form.

The main symptom of the disease is the appearance of a tumor-like formation on the skin. The most frequent location of basalioma is the skin of the face and head. Over 80% of all cases of basal-cell carcinoma are in this area. As a rule, the tumorous nodule forms in the region of the nose and nasolabial folds, around the eyes, on or near the ears, or in the temple area. Basalioma is also frequently found on the hair-covered part of the head. The external appearance of the tumor and its progression vary according to the type and stage of the process.

Nodular basalioma is the most frequently encountered form, accounting for about 2/3 of all cases of the disease. The course of the tumor process is rather protracted and goes through 5 stages.

Stage 1: micronodular.
A firm, semi-transparent nodule appears, covered in unchanged skin. The size of the nodule does not exceed 5mm.

Stage 2: ulcerous.
The nodule expands widthwise, acquiring a flat shape and reaching 2cm or more in size. The tumor’s vascular network is visible through the skin over the formation. Scab-covered lesions form on the surface. If multiple tumor sites are present, they may merge into one formation with a scalloped edge. Such a tumor is known as a conglobate basalioma.

State 3: infiltrative.
The prolonged presence of a lesion on the surface of the nodule leads to a hardening of its edges and the formation of an annular crateriform infiltrate.

Stage 4: cystic.
Necrotic sites form within the thickness of the tumor; after liquefaction, these form cysts.

Stage 5: perforating.
Continuing ulceration destroys tissues, this being particularly significant where the tumor is on the auricle or the nasal region. The tumor perforates the underlying tissues. The defect may become very large, especially if it is on the hair-covered part of the head.

A basal-cell tumor sometimes contains the pigment melanin, giving it a blue, black or brown color. This is called a pigmented basalioma.

The superficial form of basal-cell carcinoma has the most favorable course. In the initial stage, this type of basalioma manifests as a pink plaque that can grow to 10-15cm in diameter over several years. The surface of the skin may peel, thin out, be covered in scabs or have pigmented or, conversely, whitish patches. A distinctive feature of superficial basalioma is the presence of numerous shiny, “pearly” nodules at the edge of the tumor.

A variant of superficial basalioma is cicatrizing multiple erythematous epithelioma. This is typified by erosions, where scars form. In some cases, this form may transform into the nodular infiltrative form.

Frequency: no more than 2% of all cases of basalioma. It is distinguished by its aggressive progression. Externally, it resembles scleroderma – hence the name. The tumor resembles a dense plaque with a yellowish surface and visible vessels. The plaque is slightly raised above the level of the healthy skin, but in time its center becomes depressed and an adhesion to (fusion with) the surrounding tissues can be detected by touch, making it impossible to define the exact boundary of the tumor site.

4
Fibroepithelioma of Pinkus
Externally more like fibrosis, this is the rarest form of basalioma. The tumor is a large, rounded or plaque-like nodule covered in skin that is unchanged (or slightly redder than surrounding tissues). Its favorite location is the torso, especially the back and waist, and also the thighs and the soles of the feet.
Take the DNA test
Check yourself and your family!

There are hundreds of thousands of people all over the world who don't know about the risk of basalioma and ignore the first signs of the disease.

Be ready in advance! Take care of yourself and your family: take a DNA test for genetic predisposition to basal-cell carcinoma.

The diagnosis of basalioma relies on data from examination and supplementary study methods. At the first consultation, the specialist examines the formation under magnification and palpates the nearby lymph nodes.

A biopsy is a required technique in the diagnosis of basalioma. Depending on the particular clinical situation, the material for histological examination may be extracted by means of a scrape, a puncture or an imprint smear. The prepared material is studied under the microscope after being specially stained. Data from the histological analysis are used to determine the type of the tumor and its degree of malignancy.

In some cases, ultrasound examination is indicated. This helps accurately determine the size of the tumor site and the depth of the damaged tissues.

The main treatment for basalioma is the removal of the tumor. The choice of method for removing it depends on the histological type of the neoplasm, the size of the site, the involvement of the lymph nodes in the pathological process and the patient’s general health.

Surgical excision of a basalioma is indicated:

The operation is conducted under local anesthetic. If an aggressive form of the tumor has been identified, surgical treatment is often combined with radiotherapy.

To minimize the risk of a basalioma recurring, micrographic surgical excision of the tumor may be used. The key feature of this technique is that it combines an operation with a histological examination. The surgeon removes the tumor along with as little healthy tissue as possible, and the tissue removed is studied under the microscope on the spot, during the operation. If tumor cells are observed in the periphery of the removed piece, a very fine layer of tissue is cut away from the corresponding area. The operation continues until the histologist observes completely healthy cells in the material.

This is a variant of radiotherapy. Radiotherapy depends for its action on the ability of ionizing radiation to destroy cancer cell DNA. Radiotherapy can be used on its own (for elderly patients, for example) or in combination with surgical removal.

X-ray therapy is carried out as a course, with the dose for the course calculated individually.

Cryodestruction is one of the most effective treatments for basalioma. This removal technique relies on the use of liquid nitrogen, which is brought into contact with the pathological site by means of applicators. Many oncologists consider cryodestruction to be the ideal treatment for basal-cell carcinoma because of its low recurrence rate. However, this approach is not suitable for the treatment of basalioma in the skin of the nasolabial folds, or for the particularly aggressive sclerodermoid form of the tumor.

Indicated for treatment of superficial forms of the tumor. Laser therapy is highly effective and gives good cosmetic results: basalioma rarely recurs after laser removal, and the scar has a fine and inconspicuous structure. Laser therapy is normally performed with a carbon dioxide laser. The procedure is carried out under local anesthetic.

The removal of a basalioma by means of photodynamic therapy involves artificially increasing the light-sensitivity of the tumor tissues. The neoplasm is treated with photosensitizing agents that accumulate in the pathological tissues. This causes ordinary sunlight to destroy the carcinomatous cells and damage the blood vessels supplying the tumor.

Electro-surgical removal is indicated for superficial basaliomas. Under local anesthetic, the tumor is excised by means of a high-frequency alternating current. The material removed is sent for histology.

Chemotherapy treatment is used when the basalioma cannot be removed – for example, in very elderly patients with multiple tumor sites. It uses local agents that block cell division.

There is no specific prophylaxis for basal-cell carcinoma.

To prevent tumor formation, it is necessary:

to use gloves and clothing when working with carcinogenic substances.
It is very important to pay attention to the condition of your skin: any hard patches or other tumor-like formations found require a consultation with a dermatologist or dermo-oncologist.
Your future in your hands!

A DNA test is the only way to identify a genetic predisposition to basal-cell carcinoma. The treating physician will use the test results to construct an individual monitoring regime and an optimum schedule of preventive measures.

Don’t give cancer a chance: start preventing it early!