Glaucoma is a dangerous eye condition characterized by high intraocular fluid pressure with characteristic changes in visual function. Without adequate treatment, it can lead to atrophy of the optic nerve and a complete loss of sight. 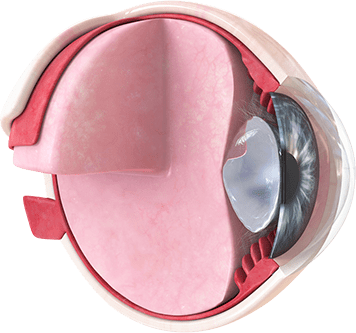 Warn yourself from diseases
Glaucoma

About 1% of the world population suffers from glaucoma. Every day, the disease causes blindness in several dozen people. In many countries, lack of public awareness and delay in seeing a specialist result in a high rate of disability. The glaucoma morbidity rate is increasing gradually in all countries without exception.

Open-angle glaucoma is one of two main forms of glaucoma. It is the most common form of the disease, accounting for about 90% of all cases. The angle-closure form, in contrast, is a relatively rare pathology encountered mainly in people with pronounced long-sightedness. In this case, intraocular fluid circulation is disrupted by clogging in the angle of the anterior chamber resulting from a spastic displacement of the root of the iris membrane.

The development of glaucoma is associated with disruption to the circulation of the aqueous humor (intraocular fluid) that fills the eye chambers and performs a number of important functions – from nutrition and immune defense to direct participation in the visual function as a refracting medium.

Aqueous humor is formed in the ciliary body of the eye and flows out into the bloodstream in the angle of the anterior chamber: the fluid is absorbed through a mesh of special trabeculae into a narrow vein. It is the blockage of this flow that leads to glaucoma. In open-angle glaucoma, the disruption is caused by a narrowing of the gaps between the trabeculae.

Open-angle glaucoma: causes and risk factors
The precise cause of the disease is unknown, but the risk factors that increase the probability of glaucoma occurring have been identified.

The most significant of these are:

The genetic factor in the development of open-angle glaucoma

About 40% of all cases of primary glaucoma (i.e. glaucoma not caused by injury or other eye conditions) are associated with the existence of relatives with the same disease. Several authors calculate that having a close relative with glaucoma increases the risk of developing the disease nine- or tenfold as compared with the population average.

Over 20 genes are currently known to be linked to the development of the disease. The effect of the genetic factor can have various mechanisms. For example, the gene for myocilin (MYOC) is able to change the structure of the fibers of the pectinate ligament, which is an important component of the eye’s drainage system. The MYOC gene narrows the gaps between the fibers,

The MYOC gene narrows the gaps between the fibers, impeding the outflow of intraocular fluid. The CYP1B1 gene, which codes for cytochrome P450, plays a role in the formation of the angle of the anterior chamber of the eye. A small deviation in its structure over time can impair the drainage of aqueous humor.

The study of genetic predisposition to open-angle glaucoma is of great practical significance. Often, the disease manifests only at the later stages, when the atrophic processes in the optic nerve are attaining serious proportions. A high risk of the disease identified by genetic testing motivates patients to see an ophthalmologist regularly for a targeted check for early signs of glaucoma.

Open-angle glaucoma can be either primary or secondary.

Secondary glaucoma is the consequence of any other illness or injury, in which case the elevated intraocular pressure and characteristic functional abnormalities are a complication.
Primary glaucoma is an independent pathology where the disorder is caused by structural peculiarities in the drainage system of the eye.

Four types of the disease are distinguished according to the age of the patient at first diagnosis:

appears in the first three months of a baby’s life. It is caused by a structural abnormality of the anterior chamber or other structures participating in the drainage of intraocular fluid.

occurs in children aged 3-10. As a rule, it is caused by a congenital pathology or structural changes occurring in the first months of life.

diagnosed in people aged between 11 and 35. Associated with genetically determined structural peculiarities of the eye.

the most common variant, manifesting at age 35 and over.

Open-angle glaucoma is a progressive disease with a typically phased process:

Initial stage:
a slight increase in intraocular pressure is observed; there are no signs of visual disorder.

Mature stage:
some restrictions to the visual field and its clarity are present.

The above stages have arbitrary boundaries and are determined by complaints, characteristics of the visual field and the condition of the optic disc.

Glaucoma develops gradually and may not be apparent at all for a long time; in the later stages, a visit to the ophthalmologist is often occasioned by symptoms that indicate damage to vital structures of the eye:

The following investigative methods are used to confirm the diagnosis:

Diagnostics do not end with the announcement of the diagnosis and the prescription of eye drops: the glaucoma patient must visit the ophthalmologist regularly to adjust the treatment and monitor changes in the condition of the eye.

Thousands of people around the world lose their sight to glaucoma that is diagnosed too late. Millions of dollars are spent on treatment that often cannot eliminate severe symptoms.

Protect your sight: Take a DNA test for genetic predisposition to open-angle glaucoma: make your prevention effective and your treatment as prompt as possible.

Ideally, correction of intraocular pressure in glaucoma should be started before the appearance of the first symptoms: early treatment enables an adequate level of vision to be maintained for a long time.

Glaucoma treatment is based on hypotensive drug therapy in the form of eye drops. These work by improving the outflow of fluid from the chambers of the eye, or by reducing its secretion. Nowadays there is a wide choice of preparations; the specialist will select the best option according to the patient’s age, the stage of the disease, the accompanying pathology, the ocular pressure level and other features of the course of the pathological process.

Treatment normally starts with the prescription of first-line preparations, which include latanoprost, travoprost, tafluprost and timolol, but the ophthalmologist may opt for second- or even third-line hypotensives. Combined preparations are appropriate in certain cases.

The possible side effects of drug treatment need to be borne in mind, each preparation having its own particular characteristics..

Hypotensive drops to treat glaucoma are prescribed for life, and their use requires regular monitoring of intraocular pressure, as practically all drugs in this category can induce tolerance, making them less effective. In this event, the specialist will recommend increasing the dose or changing the drug.

Osmotic diuretics are used mainly in acute glaucoma attacks and to treat secondary forms of the disease. The hypotensive effect results from the elimination of excess liquid from the body, leading to a decrease in intracranial and intraocular pressure.

Osmotic agents are used in glaucoma strictly as directed by a doctor.

Neuroprotectors are medicines that improve tissue nutrition by protecting the tissues from the adverse effect of external and internal factors and repairing minor damage. Betoptic, Erisod, histochrome and others are prescribed for this purpose.

The use of laser technologies in the treatment of glaucoma is a relatively new direction in ophthalmology.

Depending on the indications, the following techniques may be used:

Laser therapy is often used to stabilize the disease, and may be combined with hypotensive drug therapy.

In the treatment of glaucoma, a surgical operation is the last step in correcting the condition. Surgery is usually performed on patients in whom drug and laser therapy have not given satisfactory results. Practically all surgical techniques involve the formation of artificial openings for fluid to flow out of, or inserting a drainage implant.

The most popular operation is trabelulectomy – the removal of an area of the trabecular meshwork. In modern practice, this operation is supplemented with the local use of specific chemotherapy agents, which prevent the formation of post-operative scarring that could negate the initial effect of the treatment.

Preventive measures are insufficiently specific, and are aimed at supporting the patient’s general health. As regards the prevention of complications from the disease, the main prerequisite for preserving sight is to diagnose glaucoma as early as possible.

Regular check-ups at the ophthalmologist’s should therefore be the rule for everybody, especially from the age of 40. For those with an unfavorable family history or an established genetic predisposition, the frequency of preventive check-ups should be no less than once a year.

A DNA test is the only reliable way of identifying a genetic predisposition to open-angle glaucoma. The test results will be used as the basis of a program of diagnostics and prevention of disease risk factors.

Don’t wait for the first signs of this dangerous condition – delay is fraught with irreversible deterioration of vision to the point of complete blindness. Keep your eyes healthy: take a DNA test for genetic predisposition to open-angle glaucoma!